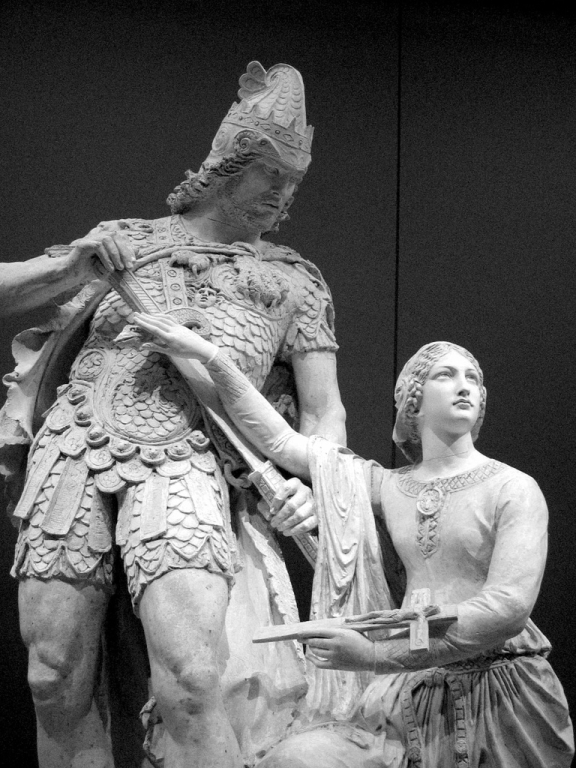 In the sixth century, Clovis I became the first king of the Franks. According to an old legend, his father, Chil­deric, was greatly influenced by a young French maiden. When she was only seven years old, this   maiden was encouraged by St. Germanus, the Bishop of Auxerre, France, to dedicate herself to the religious life. She did and be­came widely known for her charity and simplicity of life. She predicted the in­vasion of the French capital, Paris, by the Huns in the fifth century. These barbarians, under the leadership of Attila, arrived at the gates of Paris in 451. Almost singlehanded­ly, the young maiden persuaded the people to remain on the Île de la Cité in the River Seine. She assured the people that the attack would come to no­thing if they would only fast and pray. The Huns changed course, and the city of Paris was sav­ed. Later, she requested that Childeric build a church over the tomb of St. Denis, the first bishop of Paris. This church became the burial place for all the kings of France until the French Revolution of 1789. The heroine of this tale is St. Genevieve. Many people believe this legend to be an exaggeration. However, the young maiden, St. Genevieve, remains the patroness and protector of the city of Paris.

It is especially fitting that the third church of the city of Lafayette took St. Genevieve as its patroness. She is a link to the early days of Christianity, the French nation, and the practice of the Faith in daily life. In a settlement of French descendants, the Church of St. Genevieve rests on a piece of land purchased through the generosity of its first benefactor, Mr. Henry Lastrapes. His mother bore the name of the great saint. This House of God has played no small part in providing the courage and strength of faith for its members and the people of Acadiana that its patroness promoted so many centuries ago. Also of note, the priest-founder of St. Genevieve was a Dutchman whose mother bore the name of Frances, the patroness of automobile drivers. Today, the church faces one of the most traveled thoroughfares in the city. The location of St. Genevieve serves as a reminder to all people of the time­less nature of Christ's Church which knows no barriers of language, place, or social structure.