Monsignor Teurlings undertook the work of his new parish with the vigor of his youth. He lost no time in getting his people involved. He established the Ushers' Society and the Holy Name group in 1929. He attacked the church debt at the onset of the Great Depression. The debt was completely paid in nine years. In 1938, he added the eastern and \western wings, enlarging the church building to its present size. It was an ambitious project, and many paris­hioners doubted the need for a building as grand as the Cathedral. Monsignor Teurlings lived long enough to prove them wrong and to divide the parish twice more.

Times were tough, money was short, and people, the nation, and the economy were in a de­pressed state. But Msgr. Wil­liam Teurlings proceeded unflappably to the task of the spiritual nourishment of his 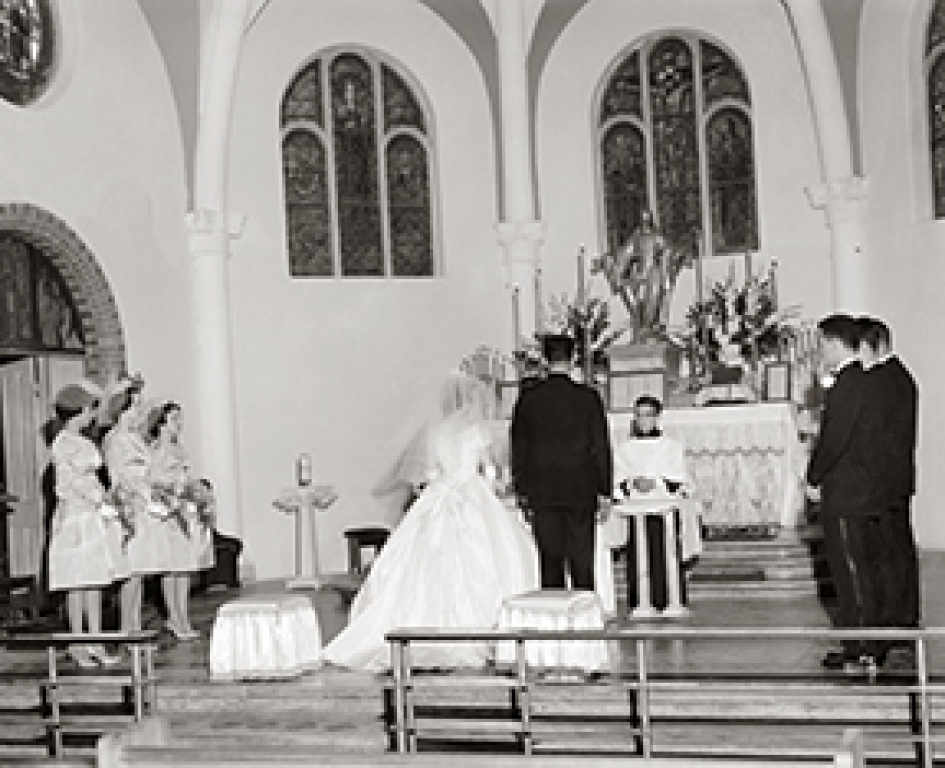 parish. His Dutch frugality came in very handy to pay off debts and purchase new property. After he enlarged the church building, he purchased a large plot of land on the Breaux Bridge Highway to assure a decent resting place for his parishioners and their loved ones.

In 1939, the world plunged into the catastrophe of World War II. Father Teurlings suffered the pain of watching many of his young parishioners leave for the war front. He spent many evenings with anxious or bereaved parents whose sons were in Europe, defending his beloved Hol­land.

During the war, he encouraged his parishioners to build a grotto to Our Lady of Lourdes "dedicated to all in the service of the U. S. Army fighting to save de­mocracy." The grotto was the idea of Miss Ali­da Martin. It was constructed at minimum cost by Mr. Pete Delahoussaye. The memorial tablet of white marble was donated by Mrs. James Whitmeyer. Parishioners rallied to this task with an abundance of prayers, encouragement and funds. The construction of the grotto also provided a means for Msgr. Teurlings' favorite hobby, chapel-founding. With the remaining funds, Msgr. Teurlings founded a new chapel dedicated to St. Patrick on the eastern edge of the parish. An assistant of Msgr. Teurlings, Father Peter Blom, also a native Hollander, became its first resident pastor after the war. In 1951, the chapel of St. Leo the Great was founded on the western edge of the parish.  Only major war delayed the next plan of Monsignor Teurlings: a new Catholic school. He pleaded with the Sisters ofsp; \      Mt. Carmel to send a few nuns to open a new school at St. Genevieve’s. He had had the warmest of relations with this order in Washington and again at St. John's; it required little to convince them. The school opened in 1945, a month after the end of World War II. It began in a little ramshackle building and struggled for six years. The war had picked the American economy out of the doldrums, and funding for a new school building did not present a major problem. However, obtaining materials was a problem. Finally, in 1951, a new building greeted the children when the school opened its doors in the fall. Meanwhile, the Mt. Carmel order had found it difficult to spare a sufficient number of nuns to staff the school. They resigned the contract, and the Sisters of Divine Providence undertook the responsibility of staffing the school in 1950. Drives, bin­gos, and endless cake and candy sales pumped funds into the school coffers and resulted in the addition of a new ca­feteria, dedicated to Msgr. Teurlings, in 1953.

In 1929, St. Genevieve did not have a parish hall. After the war, the parishioners proposed this idea to Monsignor Teurlings. He gladly approved the construction of a hall on the church grounds. The hall became known as THE PAVILION. It was built by the voluntary labor of the men of the parish. They spent many evenings building a structure that played an important part in the daily life of the parish. It provided a place for teenage gatherings, meetings, and suppers. It also provided a convenient location for wedding receptions.

In 1954, Monsignor Teurlings had spent almost 30 years serving the people of St. Genevieve's¾25 of those years as pastor. He celebrated his 60th ordination anniver­sary that year. At the time, he was a highly revered citizen of Lafayette. The Mayor proclaimed a day in his ho­nor. Mass was celebrated with priest friends. The students of St. Genevieve School presented a pageant dedicated to the Blessed Mother as a token of appreciation to their beloved shepherd. It was a spectacular end to a career that spanned two centuries, an ocean, and six decades. He spent two and a half more years in semi-retirement at St. Genevieve's. The end came the morning of December 28, 1957, the day after the feast of St. John the Evangelist.

The next thirty years in the life of St. Genevieve bore the unmistakable mark of its founder’s influence. A new high school was built and bore his name. The elementary school continued to thrive. The Faith that he instilled in his people lived. His name remains in the memories of the older parishioners to this day.