Father Teurlings spent eight years in this rural area. Then, he received the call from the Archbishop to take over pastoral duties at the Church of St. John the Evangelist in Lafayette, the heart of Acadiana. He succeeded the French pastor, Father E. Forge. 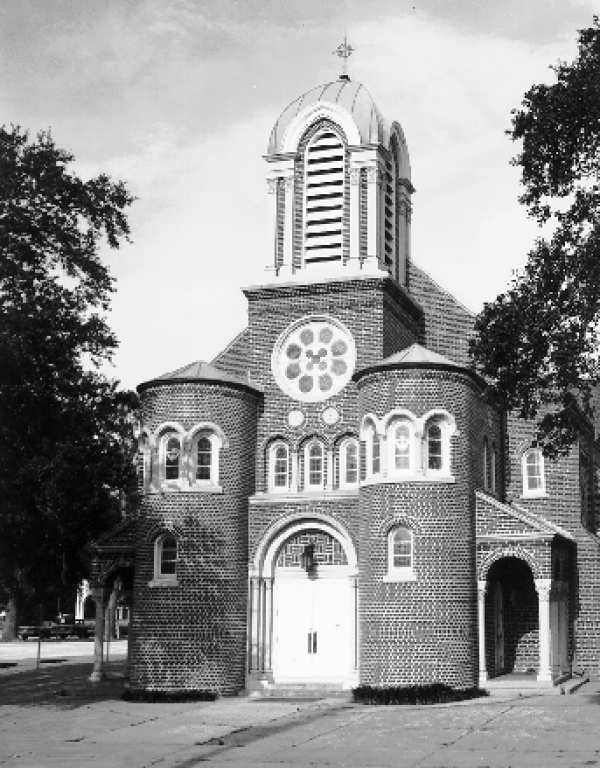 The population of Lafayette was about 8,000 in 1906, a large population for an inland town at the turn of the century. Father Teurlings was thirty-four years old. He had been ordained a priest for twelve years and was certainly one of the most travel­ed pastors of his day. It would require all his zeal to meet the demands of his new post. The former pastor had been sickly and had not been able to see to all the needs of the parish in his declining years. The church cemetery required immediate attention. Funds were needed for its repair and upkeep. The church, a rambling wooden structure, had become more than just weather-beaten. Though it was a solid structure of cypress shingles and wide wooden beams, it had not been repaired for many years.  It required the immediate attention of the new curate. He moved this building and had it reconstructed on a new location as the Church of St. Paul, the second Church parish of Lafayette. In the 1970s, the Church was replaced by the present brick and metal structure at the corner of Simcoe and St. John Street.

The new pastor solicited and received the help of his parishioners in the task of building up the Body of Christ in Lafayette. He founded an Ushers' Society, a Ladies' Altar Society, sodalities, and an Altar Boys' Society. He later founded a Knights of Columbus Council, the Apostleship of Prayer and a Holy Name Society. Within three years of his arri­val, he had begun a healthy campaign to build a new and more solid church building. Before undertaking the construction of the church, he first honored the request of the African American Catholics who desired a separate church parish. In 1911, he founded the Church of St. Paul and served its people until the Archbishop sent a group of Holy Ghost Fathers to permanently staff the parish in 1914.

Father Teurlings worked with a close friend, Mr. Eu­gene Guillot of New Iberia, on the architecture of the new St. John's Church. After engaging the services of a European archi­tect, Mr. A. Cousin, the two friends decided on a Dutch Rom­anesque style similar to many churches found in Father Teurlings' native land. The church was completed in 1916 and was dedicated that same year by the Archbishop. At the time, it was the largest and tallest building in Lafayette, a mas­sive but graceful structure of red brick trimmed with white plaster designs that incorporated round arches, colorful stained glass, and a belfry that could be seen throughout the entire town.

Within two years, this church became the cath­edral of the newly formed Diocese of Lafayette, and Father Teurlings was appointed rector.

By 1925, Lafayette had dramatically changed from the town of 8,000 to which Father Teurlings arrivednineteen years before. Two railroads established per­manent stations in the city, which was a key stop along the New Or­leans-Texas line. The local technical college was solidly established, providing higher education to the youth of the area. Oil had been discovered in the outlying areas and would shortly provide an impetus to the growth of the town. Already, its population was swelling due to the availability of jobs. And in 1918, the city of Lafayette had been singled out as the heart of the Faith in Southwest Louisiana when the Holy See chose it as the see city of a new Diocese.

Long before 1925, the attendance at Sunday Mass concerned Fr. Teurlings. A considerable group of the faithful always seemed to get to the church quite late; some arrived near the end of the Holy Mass. Though a gentle soul, Father Teurlings did not tolerate the apathy of some pari­shioners that caused them to catch only snatches of his homilies or to arrive, on some occasions, at the time for Holy Communion. He was determined to solve this problem. Discrete inquiries soon revealed that the cause of the problem was not a lack of faith but rather the size of the City of Lafayette. Crossing the city had become in­creasingly more difficult. The people of the north side of the railroad patiently explained that passing trains often prevented their timely arrival at Holy Mass. Others explained the heroic logistics involved in preparing a family of six or eight for the buggy or the Model A in time for the start of Mass. Father Teurlings realized that the growth of the area and the problems of rail­road timetables were not likely to lessen in the future. More likely than not, church attendance would gradually les­sen unless a solution was found.

The Cathedral rector began exploring town for an answer to this dilemma. He soon devised a Solomonic answer. A short search revealed the availability of a piece of property owned by Miss Edvigne 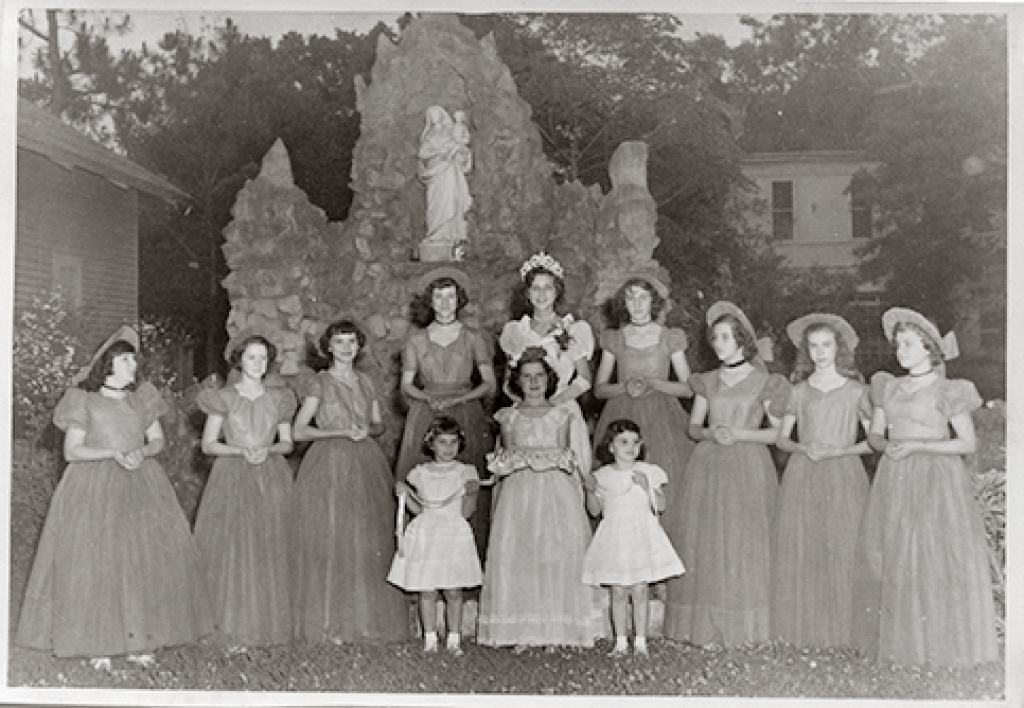 DeClouet. It was primely located, across the railroad tracks and in the center of the north side of Lafayette. The Cathedral could not afford to purchase the land, but Fr. Teurlings soon received a generous donation from Mr. Henry Lastrapes. This good soul offered Father Teurlings the then princely sum of $15,000 to help with the plans of the parish priest to found a chapel for his north side congregation. Mr. Lastrapes asked only that the new Church be named after his mother, Genevieve. Armed with a cash offer, the find of some prime land, and a name for a new chapel, Father Teurlings approached Bishop Jeanmard with the plan to get his people to Holy Mass on time. The bishop agreed. In almost re­cord time, the bishop presided over the bless­ing of the new chapel of St. Genevieve on June 25, 1925. Lafayette had its third church.

Before the first Mass was celebrated in the Chapel, Fr. Teurlings had already organized a Ladies' Altar Society. He loved to say Mass in the new chapel. If he could not be there personally, he sent an assis­tant or a priest visitor. The people had regular liturgies at the chapel and soon rallied to the religious, organizational and financial tasks at hand.

The new chapel played no small part in the honor that was soon bestowed upon Father Teurlings. He became a Right Reverend Monsignor at about the same time that the chapel opened. By this time, he had been a priest for 31 years. He was certain that he would remain in Lafayette for the remainder of his priesthood. However, he looked toward the future. Years of a damp climate, horseback riding, and mis­sion visits had taken their toll on his health. Also, he felt the pressures of parish life. He had selflessly given himself to the people of the Cathedral. He looked for new worlds to conquer. He knew that he was good for a few more years but not in a place where everything had been well-established. He could not hold the line until sickness forced retirement or the Lord issued the final call. 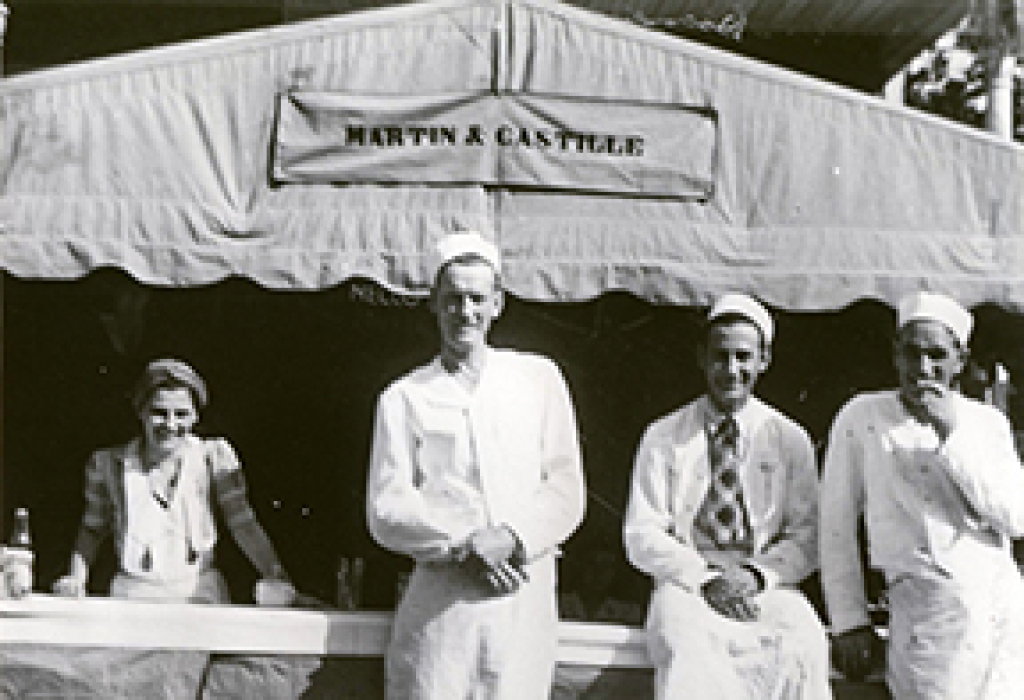 Monsignor Teurlings was always a smiling, gentle man, though no one would deny that he had been given his own gen­erous share of that famed Dutch trait of stubborn tenacity. In 1925, he had a full head of snow-white hair, a gracefully wrinkled visage, and a vivacious sparkle in his eyes. In 1929, he was an inveterate workaholic who had run out of new projects. As he looked wistfully ac­ross town at his north side chapel of St. Genevieve, he realized that there would be no lack of projects to occupy him there. He formulated his words, and then crossed the church green to see the bishop. Bishop Jeanmard, wise beyond his years, understood the inner turmoil of Father Teurlings. He gladly granted his request to become the first pastor of St. Genevieve Church. His resumed his duties on February 1, 1929.